First and foremost, SWINGR_raumaufzeit is a communication- and exhibition-platform, representing the consolidation of young, local and international Artists from different sectors of fine Arts. This project was founded by Christoph Holzeis, Luisa Kasalicky, Birgit Knoechl, Rainer Spangl and Nicole Miltner (active until 08-2006) in 2006 to give, especially young Artists, the room and the possibility to implement noncommercial and experimental exhibitions.
Since it’s opening in April 2006, single- and group- exhibitions take place in the two Swingr_rooms in the Mariahilferstrasse 101, 1060 Vienna in a weekly frequency.

By the use of concerted selection, frequency and regularity, as well as intersection of particular projects, we get down to a diversified agenda and achieve a mixing of the audience.

Our first project year will be documented by a book which will be published in Summer 2007. 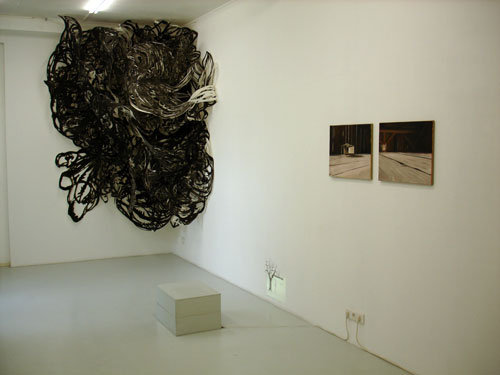 For the work „Holzfällen“, Christoph Holzeis filmed himself while trying to chop down a fruit tree in his grandmother’s garden. The resulting video is then projected onto a fruit-garden painted on a wall and leads to an irritative hybridation of both media- and reality levels. The approximately two minute video played in loop is not ending with the fall of the (painted) tree, but with partition of the actor. 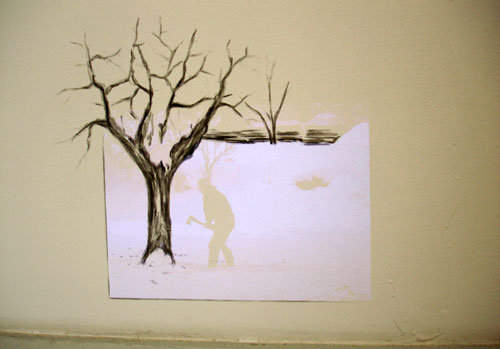 Luisa Kasalicky concerns herself with the visual implementation in the advanced pictorial and respectively installative context of a film sequence that personally touched her deeply. Her starting point was a solid film-material that is decomposed by her, looking for adequate formal and, as the case may be, a picturesque language, then transposed into space-oriented installations, video and wall-works.
Kasalicky relates these already encoded fragments and modules to each other in a different way and composes them to a new work. The goal is not to reproduce the film sequence, but furthermore to carry a fundamental vibrancy into the new work. 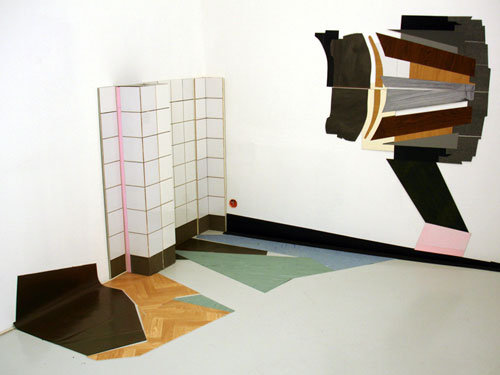 As continuation of Birgit Knoechl’s drawings and Cut_outs, her research is based on different options of approach. The potential of the drawn line and growth is analyzed. With her work, the growth of the line is, amongst others, associated with parasitic plants. Birgit Knoechl associates these parasitic plants with biological theories and science-fiction-fantasies that deal with evolution and mutation of vegetative life.
When she uses the term of growth in relationship to the drawing, she is interested in how the drawn line becomes autonomous from the two-dimensional drawing. Birgit Knoechl understands the word “autonomous” to be the process of blanking the line from the two-dimensional drawing. It is the “reaching independence” of a line, the change from the second to the third dimension. The capability of the line that gets it’s definition through the blanking ought to be researched. This process of blanking transforms the line to a three-dimensional paper object.
Birgit Knoechl doesn’t perceive the concept growth to be a metaphor. Moreover it is a principle. This principle, for her is immanent in the drawing. Due to different approaches, for example in form of a video (moving picture) or an installation (rigid picture) the drawing grows from and in itself. The immanence principle of growth thereby becomes the main focus of her work. In turn, out of this focus many associative discourses and dreams of equivalent utopic and threating forms are generated. 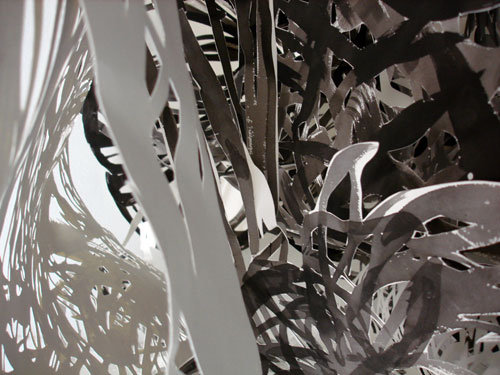 Rainer Spangl is enganged in room-filling painting, that features it’s latent fragility.
The work „4 Flügel“ is composed out of 4 wooden plates stacked on top of each other. They are different in size and surface and carry themselves leaning against the wall. In the two other works, form, color and surface are picked out as a central theme, too. 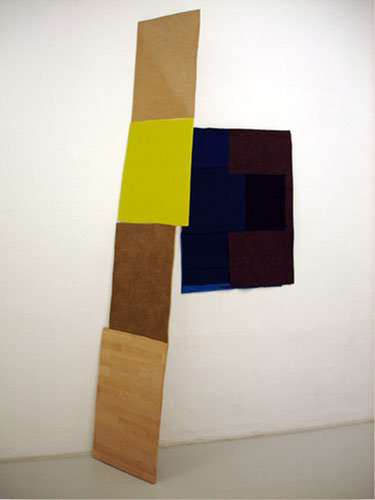