An exhibition by medien.kunst.tirol in cooperation with the Kunstraum Innsbruck 2002 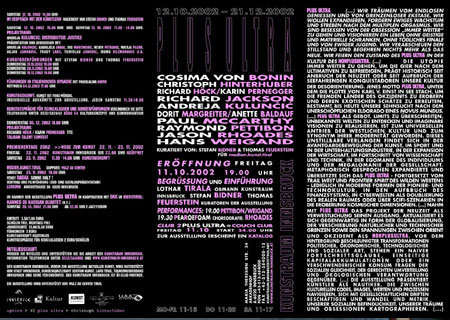 PLUS ULTRA
(…) We dream of endless joy and unlimited ecstasy. We want to expand, demand everlasting increase and strive for multiple

orgasms. We are obsessed by obsession to “go further” and visionaire a life without mental or substantial boundaries, without a

mortal finale and eternal youth. We detest stagnancy and desire nothing more than recency. We celebrate the state of PLUS ULTRA

in the culture of NONPLUSULTRA (…)

The utopia to proceed, to satisfy the lust for the ultimate, forms our culture of disorientation since beginning of

modern times or departure of seafaring conquistadors. This device PLUS ULTRA, among Karl the 5th’ armada once set sail, to

conquer foreign countries of the occident and capture their exotic treasures, rules our longing for an unexhaustable eldorado of

a novus mundus, until today. (…) PLUS ULTRA as a precept, to exceed limits, to discover unknown worlds and realize imaginary

visions, has become a universal impulse of western culture and a synonym of its modernity. This quenchless longing is locatet in

the avant-gardesque art, in sports and entertainment industry, economy expansion, in scientific and technological progress, in

egomania of the individual and the megalomania of society. Metaphorically, PLUS ULTRA simply expanded and translated -continued

from trail west and frontier spirit of the wild west- in modern forms of pioneer- and techno- culture, in the upraise of the

financial system, the cyberworlds as duplication of real room or with sci-fi scenarios in the conquer of cosmic dimensions.

(…) While with PLUS ULTRA the project of modern times took place by westernization, it nowadays updates in a form of globalization, the displacement of natural and technical borders, as well as eagerness between orient and occident as NONPLUSULTRA. Against the background of accelerated transformation in a political, economical, technological and social way; a simple-hearted belief in progress, onesided capital accumulation or a lavish consumption, questions of social equality, the fair redistribution and economic responsability stand face to face.(…) The exhibition presents artists as navigators, that navigate between cultural codes, images, values and processes, deal with social drifts and map change and metrics of our social existential orientation, our dreams and obsessions. (…)