* 1969 in Graz, Austria
lives and works in Vienna and Melbourne. 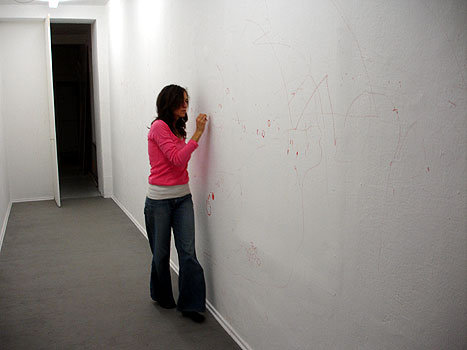 The atmosphere of the „Kunstraum Innsbruck“ is measured over a 3-5 hour period of time. The generated float-pictures during this process are graphic memoranda, “fold-aparts” of the current atmosphere. They show possible levels of reality, with no other intention. The float-picture describes nothing, it’s nature is fragmentic. It is anti-descriptive in a degree, that every condition is directly put into an essence of appearance. It is the trace of presence by a filter and refers to attempts of being in this room.

Ideally the whole room is used as projection plane. Using appropriate media (oil chalk, wax crayons, pencil), according with the organizers, drawing takes place on walls and floor. After the performance there will have formed float zones on the surface. Previously you can’t tell in which density, shape and dimension they will occur.

The measurement takes place as a parallel activity accompanied to other happenings of the event, for which the best suited time segment is still defined. The performer reserves her right to oscillate her presence in the room. She will act in a bandwidth from contained attendance to intense activity.